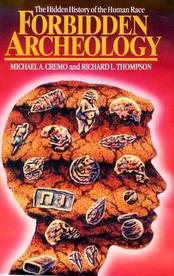 "Forbidden Archeology: The Hidden History of the Human Race is a 1993 book by Michael A. Cremo and Richard L. Thompson, written in association with the Bhaktivedanta Institute of ISKCON. Cremo states that the book has "over 900 pages of well-documented evidence suggesting that modern man did not evolve from ape man, but instead has co-existed with apes for millions of years!", and that the scientific establishment has suppressed the fossil evidence of extreme human antiquity. . . .
​
Forbidden Archeology has attracted attention from some mainstream scholars as well as Hindu creationists and paranormalists. Scholars of mainstream archeology and paleoanthropology have described the work as pseudoscience."
Reviews
People
Artifacts and Sites
Blog Posts and Articles